Sarkar Ali Bawa Rafaee Murshad And The Malang Of Mumbai 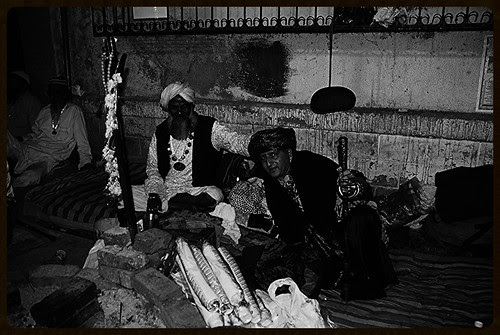 Sarkar Ali Bawa Rafaee Murshad And The Malang Of Mumbai, a photo by firoze shakir photographerno1 on Flickr.


Shooting the rafaees at the Mahim Dhuni during the Urus of Makhdhoom Shah Baba was a great escape from the world of glamour glitz Bollywood .

So I would rush late in the evening to capture the Rafaee angst, I dont smoke so have a special cup of butter tea made on the Dhuni fire .. the Rafaes would ask me to stay back for dinner , but I skipped the invitation as dinner time is very late here ..

The most interesting aspect of shooting here is , the sandals that pass from the Dhuni paying tribute to the Murshad Sarkar Ali , he gives generously to the drummers and the performers.

Most of the Sandals enter from the back of the Mahim Dargah.. as the facade in the front of the Dargah is restricted to vehicles .. so they enter in from the Mahim Police lane ..