About Dam Madar Malangs of Ajmer 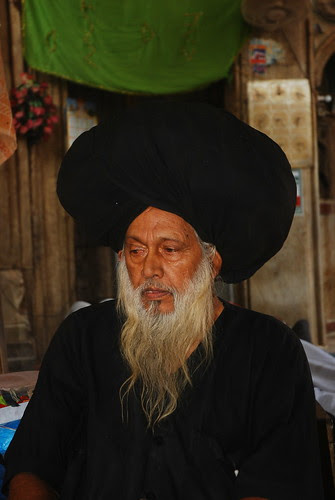 About Dam Madar Malangs of Ajmer, a photo by firoze shakir photographerno1 on Flickr.

The Madariyya are members of a Sufi order (tariqa) popular in North India, especially in Uttar Pradesh, the Mewat region, Bihar and Bengal, as well as in Nepal and Bangladesh. Known for its syncretic aspects, lack of emphasis on external religious practice and focus on internal dhikr, it was initiated by the Sufi saint 'Sayed Badiuddin Zinda Shah Madar' (d. 1434 CE), called "Qutb-ul-Madar", and is centered around his shrine (dargah) at Makanpur, Kanpur district, Uttar Pradesh.
Originating from the Tayfuriya order, as his Pir, spiritual teacher was Bayazid Tayfur al-Bistami, Madariya reached its zenith in the late Mughal period between 15th to 17th century, and gave rise to several new orders as Madar's disciples spread through the Northern plains of India, into Bengal. As with most Sufi orders, its name Madariya too has been created by adding a Nisba to the name its founder, Madar in this case lead to Madariya, sometimes spelled as Madariyya, though it is also referred as Tabaqatiya at many places.[1][2][3][4][5]
He was blessed with long life of 96 years and his presence is found from Shaikh Abdul Qadir Jilani at Baghdad Sharif till Sufi Chisti saint Khwaja Gharib Nawaz, Moinuddin Chishti of Ajmer .

The Dargah or the tomb of Badiuddin Zinda Shah Madar is located at Makanpur, near Kanpur city, in Uttar Pradesh state in India. Till today it is visited by thousands of visitors every month and especially during the annual Urs celebrations.[6] Even Moghul rulers & emperor like Aurangzeb, Akbar, Shah Jahan, Ibrahim Shirki has paid their visits at the tomb. The dargah in Makanpūr gained increasing importance during the Mughal period. Various rulers donated land, while others erected buildings there. Aurangzeb (1068-1118/1658-1707) visited the shrine in the year 1069/1659 while marching against Shāh Shujāʿ.
[edit]The Tariqah

Most of the biographic details regarding Baduddin Zinda Shah Madar, are shrouded under numerous legends and stories of his numerous miracles, however, an important source of such information, come from his important hagiography, Mirat i-Madari written in 1654 by Abd ur-Rahman Chisti. Since then a number of hagiographic texts have emerged.[7] The silsilah (lineage) is still live throughout the world with the pir-muridi tradition. The Pir's of Makanpur sharif are 'Sayed's" (decedents of prophet Mohammed ). The Madariya chain of Sufi brotherhood is the oldest, largest & fastest growing Sufi brotherhood of the ancient era.