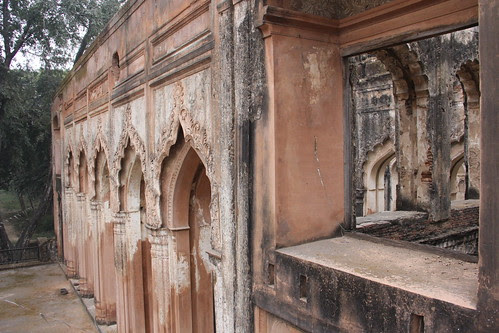 And I shot British Residency , like a loner , I always shoot as a man who has only a day to live on earth and perhaps I shot from a angle I had missed in the past.

This is not my genre of photography but beneath these images lie faces of people the hustle bustle now dead and gone..I shot the ruins of Adab Tehzeeb Culture now scrawled with juvenile puppy love on the pristine walls.

I would have wanted my wife here her silhouette of the hijab adding blood sweat tears to my images ..but than a Shia wife during Moharam is bound by the Code of Azadari. it is majlis matam and no other aspect of socializing

I too on my part tried to connect with a few photographer friends one was in Andamans , and the other had locked himself in self guilt not wanting to respond to my calls or my messages .


Than on second thoughts I dont have many friends even in Mumbai, my best friend white as alabaster is shooting Tongi Ijtema in Bangla Desh an event I would never shoot even if God had requested me to do so.. for me Tabligh without Hussain is not the Islam of my choice..

I am a blogger we are ruthlessly opinionated I wold rather take a dip at Shahi Snan than take a dip at Tongi.. I would rather shoot the Malangs Rafaees and the beggars of Ajmer than shoot a Ijtema it is not part of my lifes poetry pathos and Bangladesh Pakistan are two countries far away from the vision of my Poetry

I am a Hindu Shia and that suffices the angst of my soul...