Shooting Moharam..The Inner Angst of My Pain My Self Expression 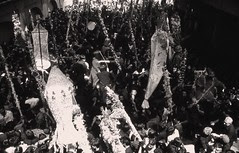 Shooting Moharam..The Inner Angst of My Pain My Self Expression, a photo by firoze shakir photographerno1 on Flickr.


I began shooting Moharam about a few years back.. if I had not taken up photography to get rid of my inner angst my inner pain , which I will not give an explanation but I was a victim of alcohol abuse and I gave up alcohol completely thanks to my familys faith in me.. their prayers that pulled me through...I would have ended up in a lunatic asylum.. I was bad case ..

I needed an intoxication to replace my thirst , that the the psychiatrist felt could have an healing effect on me I chose the camera and met Habib Nasser Baqar they their friends changed my life further..

I began documenting Moharam.. not just for the Shia more fervently for the Non Muslim friends and later my foreigner friends , not being a preacher , not being just a Shia but also a human being..

I began this task,, and shot Moharam in most of the major cities from Mumbai the starting point to Lucknow Delhi Mehmoodabad Kolkatta Hyderabad and Chennai Chehlum in Hussain Tekri Jaorah.

Those days perched above the Amin Imambada gates thanks to Nasser of Lucky Hotel a single camera body I shot from one place color film, color slide and black and whites on Delta Ilford ..I got my black and white rolls processed at Huzefar Rassiwala Mahindra Patil , got my prints done by Satyendra Dalvi Bhai Humne for color and spent a fortune sending these prints to camera club circuits along with late Prof BW Jatkar and Mr KG Maheshwari..

Than everything changed I gave up analogue photography sold all my film cameras bought the Nikon D 80 and learnt photoshop I still type with one finger , and later a sword wound at Delhi made it impossible to type with my right hand but it is one finger tpying till date .

So this post is a tribute to my Gurus my friends who played an important part in molding me including my Camera Club Photographic Society of India now celebrating its 75 year.

I became an incorrigible Internetter made a lot of friends from abroad friends who fascinated with the essence of Moharam in India , Shiasm actually come down to shoot our pain every year.

And thus began my tryst with my faith.. my inner expression as a poet so I get pretty upset when I am clobbered by hate comments by bigots racists in my community too.. for shooting other religion other ethnicity and so I hesitate getting friendly or adding new friends .. see my stuff move on whether you like it dont like it it is my vision my camera my parentage that makes me do what I do.

If I hurt your sense sensibility inadvertently I apologize as that is not the end or intention of my photography .

I disallow comments because you did not shoot what I shot , you were not my target audience at all .. my pictures are public because I shot this publicly.. I am not into debate dialogue regarding my religiosity you have issues with my faith my customs go to a Shia scholar sort it out .. dont chew my brains .

If you ridicule people in my pictures I shall simply black you .. this is for Facebook dudes irrespective of who you are I dont mock your faith your religiosity I give it respect and more respect when I shoot it as a photographer I become more human than you can ever be ..

These are old pictures a set called Scanned Memories I shot on film the Epson scanner was a gift from a friend to scan my slides film .. but when bad times came I sold the scanner to a friend ..

I still have all my negatives slides as memories of an era that I am not willing to forget as a street photographer .I have a lot of prints to that have won acceptance at the various salons .. all part of old time nostalgia.

And because I had great Gurus all Hindus the cream of photographic ancestry I placed the camera in the tiny hands of my grand daughters .

In my family now everyone has become a photographer thanks to my grand daughters.