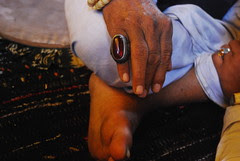 I Place My Silver Antique Ruby Ring On The Finger of My Peer, a photo by firoze shakir photographerno1 on Flickr.

I got this ring from a Sufi dealer of Iran, he liked me a lot he was called Fairuz and he liked that I too was called Firoze..

He had placed this ring on my finger but somehow it did not make me comfortable it would make me feel that it was meant for someone else , I tried to sell it but being extra ordinarily unique many a dealer did not take it from me, I dont know why even though the price of silver had shot up, I was going through a very rough patch I never sold it instead I sold my Nikon ED 80-200 prime lens to make the Urus trip last year, when times were bad I sold my Sony Brand new handycam that was gifted to me , to get through a patch of life but I held this ring for reasons I dont know,

This year I bought it to show it to my friend Kapil Agarwal gemstone dealer at Char Yar , and I was carrying it in my bag as soon as Peersaab Sayed Masoom Ali Shah Baba Malang Madari Asqan made me a Malang and a Murid of his I placed it on his finger as my token of humility , my pledge to be a good human being...

I did not need to tell this personal tale but I share it with you to tell you that everything has the name of its owner embedded on it...the ring belonged to Peer Sayed Masoom Ali Shah Baba Malang Madari Asqan much before it was presented to me..

And was it necessary to become a Malang I dont know the workings of my fate , , I became a Malang inspired by a foreigner from Belgium Marc De Clercq I owe this to him..

I was a mystic much before I entered Char Yar and met Peer Sayed Masoom Ali Shah Baba Malang Madari Asqan in 2005 all those pictures I shot of this group year after year I placed in this set of Dam Madar Malangs of Ajmer at Flickr.

And I am a Shia a drop of a tear born from the eye of the Supreme Mother Bibi Fatima..

Like the Malangs my black clothes are stuck to the soul of my bleeding flesh.. I wore dread heads too once upon a time I shall grow it again... why I stopped growing it was every time I place the sword on my head on Ashura and Chehlum I ended up cutting my dreads too and ... now I am stuck for words...completely..