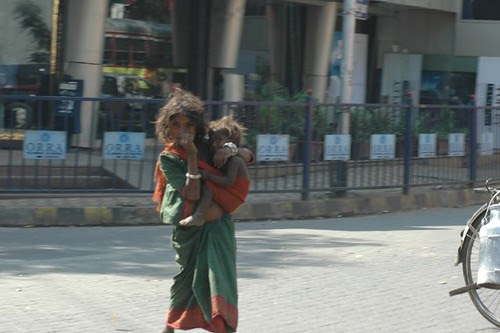 
I shot the kids at the Turner Road Traffic signal each time I walked to my old work place off Waterfield road Bandra , or while returning from work and I honed my mind my soul to pain , I shot the hijras along with these kids vying for begging space.

I moved I stopped passing by , but this is the main artery for me to go towards Juhu or Versova so I met them off and on.

As this is a high end traffic signal the fine for begging was slapped on the kids and the hijras Rs 1200 or imprisonment , they paid came back moved to the Pamposh Linking Road signal.

On 15 August and on 26 January they sell our countries flags..but their mot lucrative period , when they work round the clock is the Mount Mary Feast..the little girls all walk talk like Katrina Kaif the poor childs role model, the beggar boys all ape Salman Khan to the hilt and their favorite picture is Wanted..

Once in a while I sit with them chat with them when their folks are not around..they dont care about god or politics..both gone to seed.

I am their role model because I look a bad Xerox copy of Shakti Kapoor , yes among the villains they love Shakti Kapoor he is their evil ultimate.

Amir Khan Sharukh Khan and Saif Ali Khan dont make it on their street list at all...and this might be simply because in their eyes nobody can dislodge Salman Khan..the only NO1.

And yes I must mention Salman Khan has done a lot for kids such as these .


I dedicate this to him and his Be Human generosity, and he does not stand on the shoulders of newspaper barons to be noticed..

And if he stood for elections to revamp the maliase in our fucked political system for better governance I would be the first vote for him..

Marziya Shakir is saying I too..

He is the stellar star in the Galaxy of a poor unwanted child .. child of a lesser god..