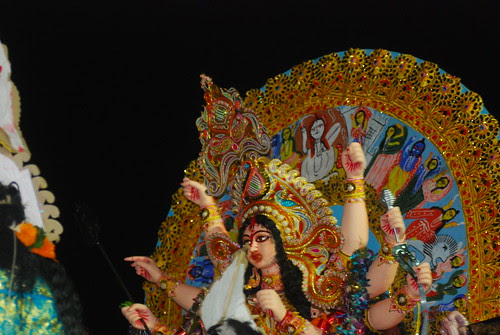 I was planning to move out of Dadar Beach as I was not satisfied shooting the Durga Visarjan in pitch darkness , the light on the beach came from the Artis ..

As I started moving out I saw the truck bringing in the Bengali Durga , on inquiry I was informed that they were from the Bengali Association of Antop Hill.. I told this person I was a shooting for the Internet..

It was here while shooting this Durga that I faced the ire of a gentleman who was absolutely rude and did not like me shooting pictures , I have shot so many Bengali pandals and this man educated , Bengali not drunk really shocked me no end..Maybe it was my attire or maybe it was his bad hair day , but I never expected such a behavior,.. Durga belongs to everyone and I as barefeet Muslim blogger brings her message of Peace Hope and Harmony ..as I shoot her with a divine passion and spiritual intensity as a photographer so she can be shared with all who pass by my blogs on Flickr Facebook Twitter Wordpress Blogspot and other sites that I post to including Live Journal and Vox.

I shot this man too.. and I am sure when he sees his picture he will realize that being polite courteous is also the most important ingredient of Ma Durgas hospitality.