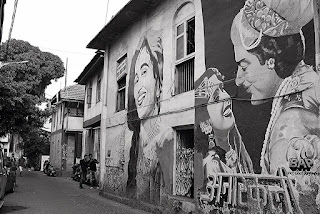 Anarkali is a 1953 Hindi historical drama film directed by Nandlal Jaswantlal and based on the historical legend of the Mughal emperor Jahangir. As per the legend Jahangir revolted against his father Akbar over his love for a common girl called Anarkali.

It was the top grossing Hindi film in the year of its release, and one of the biggest Hindi film hits in its decade.[1] Another film on the same theme was Mughal-e-Azam, made in 1960, which was again a major commercial[2] and critical hit.


Shahenshah Jalaudin Akbar is the grandson of Babur, and the son of Humayun. He is known to have ruled over Hindustan with a humane and just heart. He knew in order to garner the support of the Hindus, he must treat them sensitively, allow them to worship freely, and in order to maintain this peace, he married Jodabai, a Hindu Rajput, the sister of Raja Man Singh. Through this marriage they became the proud parents of Shehzada Salim. Akbar first met Nadira in the Anar garden, while she was awaiting the arrival of her lover. So pleased he was with her that he wanted to reward her, but she only asked for an Anar, so he ended up bestowing her with the name of 'Anarkali'. He met her the second time when she was able to revive Salim, who was seriously wounded in a war in Kabul. Once again Akbar was pleased with her, wanted to reward her, but again she turned him down. The third time she ended up annoying Akbar when she sang and danced in his court under the influence of alcohol, and he has her imprisoned. The very foundations of Akbar's palace will be shaken to the roots, and his manner of meting out justice will be put to the extreme test, when he finds out that Salim is in love with Anarkali and wants to marry her. While Akbar may have been successful to end the strife between Hindus and Muslims, but will be able to break down the wall between the rich and the poor?

Cast[edit]
Bina Rai ... Nadira
Pradeep Kumar ... Shehzada Salim
Kuldip Kaur
Ruby Mayer ... Rani Joda Bai (as Sulochana)
S. L. Puri ... Raja Man Singh
Manmohan Krishna ... Parvez (as Manmohan Krishan)
Noor Jehan (as Nur Jehan)
Mubarak ... Shahenshah Jalaudin Akbar
Trivia[edit]
Vasant Prakash began work as music director, but died having recorded just one song with Geeta Dutt. C. Ramchandra took over as composer and insisted not only that all songs be sung by Lata Mangeshkar but that the Geeta number be removed from the film. Although the Filmistan people agreed, the Geeta song stayed in the movie and was the famous "Aa Jaane Wafaa"............